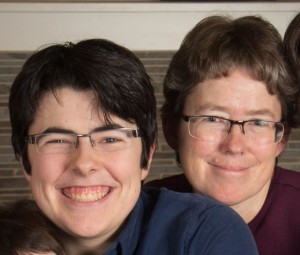 This is my new monologue from the 2017 Mama-logues, a comedy cabaret about mothers, children, and parenting….

Back in 1993, when my oldest was a baby, I was a clueless and exhausted first-time mom. In the middle of the night, as my child was crying, I often sang a song called Everything Possible by Fred Small. “You can be anybody you want to be, you can love whomever you will, and know I will love you still….”

Beautiful sentiment right? But I confess one of the main reasons I sang it was it was one of the longest songs I had memorized, and I could just press play in my head and sing it through while I was half asleep…

But… it did have a message we wanted to share with our kids… a message we gave over and over… “we will love you no matter what… really…. no matter what…” I joke with my kids sometimes saying: “I mean, if you become a serial killer, we’re going to have to have some really serious talks, but I will still love you…”

That song included the line “some women love women, some men love men…”

I told my kids that it was totally OK with me if they turned out to be gay. But I also admitted that I hoped they would be straight. Because that’s an easier road to walk in our society today. And because I’m their mother, I’d really love for their lives to be as easy as possible.

Well, sure enough, over the years, they both came out to me. In their teen years, they both came out as bisexual. And you know what? It was OK. Really it was. And it was made easier by the fact that societal attitudes toward homosexuality have made such massive shifts over the past few decades. Who could have guessed back in 1993 that gay marriage would be legal nationwide in 2015!!

Their identities have evolved over the years.

My middle child now identifies as bi-romantic or lesbian but asexual. I, of course, support her and love her. (And, if I must be totally honest, it’s really kind of a relief when your college age child tells you they’re not interested in having sex…. Lifts a whole lot of worries right off your shoulders!)

Now, my oldest child… the one we knew as my daughter Amelia? Well…. Two and a half years ago, that child came to us and said…

We’d had hints this might be coming… but only for a year or so.

Most of their life, this child presented as not just a girl, but very much a girl. In grade school, distancing themselves from the boys, talking about how boys are jerks and hanging out with the girls.  In middle school, as the curves came in, embracing and showing off that curvy body. Embracing the image of “gamer girl” while playing dungeons & dragons and watching anime.

So… unlike the families of transgender kids who say “well, I guess I’ve always known”, I did NOT have that experience!

I accepted his word that this is who he is. I did. I did! But yet… I had such a hard time grasping it…. I said “but… but… you always acted like a girl… you always embraced being a girl… right??” He said “Yeah, I did. And I meant it at the time. Maybe that was defense against a truth I wasn’t ready to acknowledge.”

I accepted this new identity. I did! But yet…. I said “do you remember how I said I kind of hoped you were straight, because that’s an easier road to walk? Now you’re telling me that you’re going to be walking on a really, really hard road. We’ve made so much progress on gay rights that that doesn’t scare me that much any more. But transgender rights or even awareness?? Oh honey, that’s not there yet! Are you SURE this is the path you need to walk?? Isn’t there another way?”

Now, I know the answer to that. An old friend came out as transgender about ten years ago. She told us that she tried to deny her gender for years, and it hit the point where every single day of living as a man she had to talk herself out of committing suicide. She finally had to say to her wife: “I am a woman. I know you thought you married a man, and you didn’t choose this… but if I’m going to stay alive to parent our children, I need to do that as a woman.” Ten years later, they’re still together, and they and their children are doing well…

I am so glad that my beautiful, wonderful child does not have that level of dysphoria that my friend had. Amongst the cisgender population – folks like me who have a gender identity that matches their biological sex – the chance they’ll attempt suicide is less than 5%. Amongst transgender people it’s 41%. I am so glad my child does not feel this degree of self-hate. But he does have dysphoria… when people refer to him as “she” or “her” he does have that sense of wrongness… When people say “he” or “him”, he feels like he is being SEEN.

So, we began a new journey, me and my oldest son…

We’ve stumbled along the way.

There was a period early on where he instituted a pronoun tax… if I accidentally mis-gendered him, then I owed him a quarter. And believe me, the jar filled up fast.

Now I’m really good at his gender… but now sometimes I accidentally switch to the wrong pronoun for one of my other children! Or for the dog…

There are some odd moments of having a transgender son on testosterone. Recently, I confronted him and said “are you the one who used up all my maxi pads?” and he said “no, Mom. No, the only reason I’ve been in your bathroom lately is to use Dad’s razor.”

The person who had the easiest time adapting was our youngest child. Ben was 3½ when Martin came out. Ben accepted the change without blinking.

A short while later, we saw a close family friend, and Ben said “I used to have two sisters, but now I have a brother and a sister.” Our friend laughed and started to correct Ben, and we’re like “Well… actually…. There’s something we need to tell you…”

A few months later, Ben learned about a character in the Mario Brothers games named Yoshi…. the green turtle-y dragon thing? Ben asked if we would call him Yoshi. We said sure, thinking it was just for that day. After that, Ben insisted on being called Yoshi. For the next 11 months. Everyone at preschool believed that to be his real name.

He has now returned to being Ben… turns out that it was “just a phase.” But Martin… is still my son Martin. It’s not a phase, it’s who he is.

Like all mothers, I want my child to be healthy, and happy, and whole. So, when he introduced himself as my son, Martin Emilio… and later introduced me to his boyfriend Xander, what else could I say other than “you can be anybody you want to be, you can love whomever you will… and know I will love you still.”

PFLAG’s Guide to Being a Trans Ally: covers all the basics, including defining terminology like cisgender, transgender, gender expression vs. gender identity vs. sexual orientation.

GLAAD’s Tips for Allies of Transgender People: actions you can take to “help change the culture, making society a better, safer place for transgender people…”

The National Center for Transgender Equality’s Supporting the Transgender People in Your Life. Tips on interacting with transgender people, being an outspoken ally, changing businesses and schools, and changing the world.

Preparing a Child for a Doctor’s Appointment